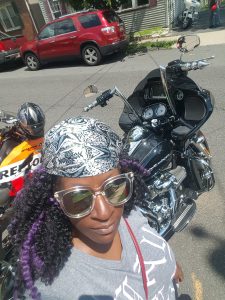 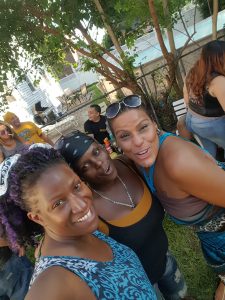 Sunday I spent the day with a long-time friend (Linda) to celebrate the life of her father who would have been 84 years old had he lived to be with us.  Rather than a mournful ceremony, my friend chose to celebrate his life with a friends and family cookout at her home.  She chose to enjoy the beautiful summer day the way her father would have… by LIVING!!!

Linda recently joined a motorcycle club, so in addition to the cookout, the morning actually 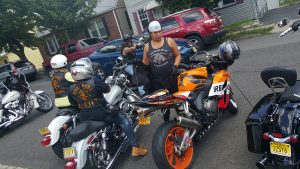 started with a bike blessing and ’run’.  Several of her biker friends (henceforth known simply as… friends) were nice enough to let me join them (sans motorcycle) as they gathered at her house before the cookout to take a ride in honor of her father.  We gathered in the backyard as the priest (yes, an actual priest) led us in a bible reading and prayed over us.  We then went to the front of the house where the bikes were lined up and the priest blessed the bikes with holy water and anointed our heads with oil.  The blessing ceremony was moving and lasted about 10 minutes, but now… let’s ride!

As everyone begin putting on their gear to get riding, I began to get anxious.  There were vests, face masks, bandanas, jackets (nah – no jackets – too hot), gloves, helmets, and of course… motorcycles.  None of which I brought with me.  Actually I did have a headscarf, good thing, because the helmet my friend gave was super tight over all this hair.  Because I didn’t have a bike, my friends partner (Charlie) was kind enough to ride me on his bike.  First of all, Charlie is no little guy, and trust me his motorcycle is just what you 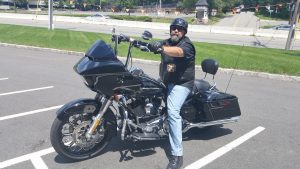 would expect for a guy of his size and stature with his personality.  This thing was massive, like the 18 wheeler of motorcycles. (At least from what I know of motorcycles) Hard case saddle bags on both sides, super large seat (with attachable back support – that was for me), transmission/engine protection bar, huge spikes for handles, and the cherry on top… A RADIO!!!  OMG!!! This motorcycle had a radio.  It’s kinda crazy because I left my headphones home but then I thought I shoulda brought them so I could listen to music while I was riding.  So let me just say… the LORD answers prayer… there was music… and I didn’t fall off. Thank you JESUS!!!

Heading out, I was super nervous, I held on to Charlie for dear life.  I think he sensed my 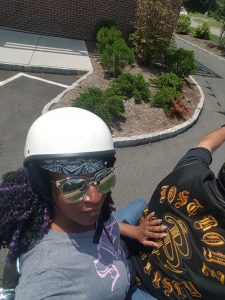 nervousness too because he didn’t go to fast, took it easy on the turns, and didn’t get too close to cars.  There was a point where I remember thinking… I’m sure he can go faster than this. (Reason #1 why I don’t need my own bike) Despite that, I had this huge smile on my face for the first five minutes of the ride as we approached the highway, then I 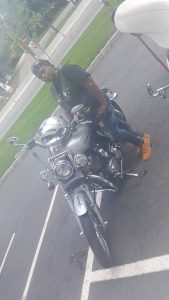 thought… I should probably close my mouth before something fly’s in there, and for the rest of the ride there was a huge grin.  As I sat on the bike behind Charlie, I could see the group in the rearview mirror, and in particular I saw my friend Linda riding a motorcycle for the first time… AWESOME!

And-let-me-say… there are few things in life that provide the thrill and exhilaration that comes with riding a motorcycle.  I mean, I’ve ridden on the back of motorcycles before, but never such a distance to let me really enjoy the experience, and it was 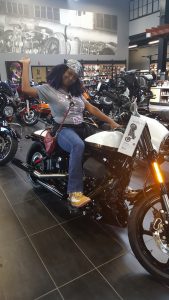 never on a Harley… the true blue American classic.  Perhaps it was the Harley that made all the difference.  It also didn’t help that we rode to a Harley Davidson store where now I could look at the bikes, sit on the bikes, inquire about bike classes, and price them.  I walked around mesmerized with the selection, tried to stand them up (boy those things are heavy), and asked a bunch of questions.  I’m not going to lie… I am seriously interested in the possibility of getting a motorcycle of my own.  Not tomorrow (baby steps Rashia) but it is something for me to consider.  (More on this in my final blog write up, I’m discovering so much this summer)

Before we leave the store, the girls give me a riding pep talk.  They let me know that I can 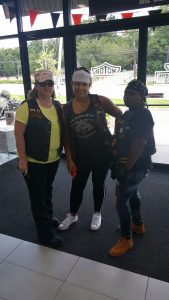 sit back and relax (because I have the back support) and that I didn’t have to hold on to Charlie for dear life.  So I relaxed a bit.  I didn’t pull out my cell phone on Rt 287, but I did sit back a bit, watched the sky, checked the scenery, and enjoyed the ride.  Charlie must have felt me relax too because he sped up and we went fast!!! Not super-fast, but a lot faster than the ride up.  I think his speeding was good for the group too, because people were passing each other, there were open lanes ahead and everyone really seemed to be enjoying the ride.  And, I-get-IT!!!  I enjoyed it too!  AWESOME!!! 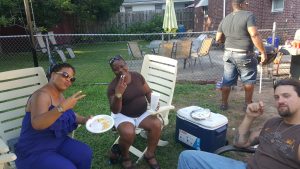 We made it back to the house where the cookout began.  A whole bunch of food for a good group of people. 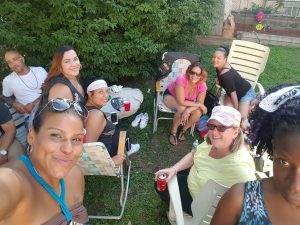 Thanks Linda and Charlie for letting me be a part of your memorial celebration. 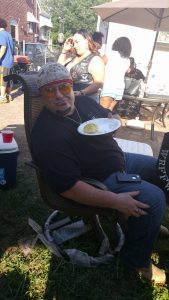 Thanks for giving me a glimpse into your world and not finding it robbery to include me in the ‘run’.  Everything about the day was GREAT… good food, better people, interesting convo, and FUN! 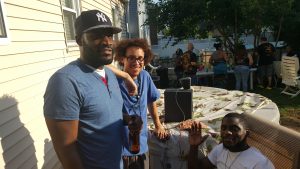 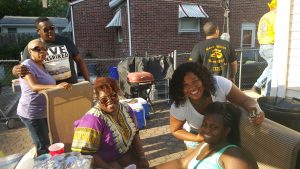 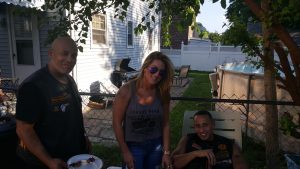