The Bruno Mars concert was awesome!!! 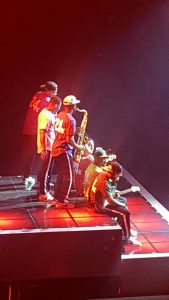 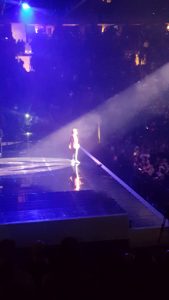 But… as an avid concert goer who proclaims to only see the greats, and by greats, I mean that elite arsenal of performers that don’t need opening acts, those so coveted there’s no way they would settle for a thirty-minute set as a part of some entourage tour rather they are given top billing at multi-day music festivals, and those who wrote the book on bringing their music to life so their fans have no problem spending lots of money for great seats… I left Bruno’s concert thinking…

There’s room for improvement.  It really was a good show, but I have seen some G-R-E-A-T shows!  And to use all my euphemisms at once, this show missed the mark, it didn’t cut the mustard, not quite a home run, didn’t hit the nail on the head.  It’s just… something was missing.

To start, three things he could do differently: 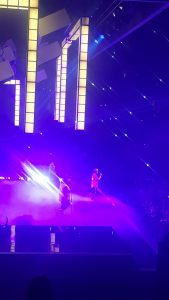 And look… I get that the 24KMagic show is for Bruno to serenade his fans with the new album, which is exactly what he did.  But did he have to sing all nine new songs in succession???  I am certain he could have found a way to integrate the new songs with the old songs, especially since his earlier music is better.  The girl sitting next to me leaned in and asked,  did he sing Gorilla yet? (Because she was late) Unfortunately I had to tell her no and he never did. (And I love that song!)  I eventually found myself counting the songs hoping he would just get through them already.  For me, the show didn’t start until he sang Marry You.

Don’t get me wrong, Bruno’s show isn’t all doom and gloom.  It really was a good show. 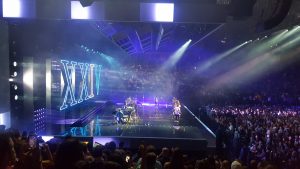 (But I have seen G-R-E-A-T shows) The influence of MJ, Prince, and even James Brown was felt all evening. There were actually times when I felt like I was at Prince concert, and that’s no small feat, unfortunately… it went right back to being a Bruno Mars concert.  In addition to his musicality and his ability to make a guitar play without touching it (like Prince can), I was super impressed with the unique touches that made this a Bruno Mars concert.  Me being the avid concert goer, trust me… I noticed:

All in all, Bruno Mars put on a very good concert. After posting on the Facebook that I was attending the Bruno Mars concert, one of my equally inspired by music friends commented that Bruno is the “hottest young talent in the game right now & a real true musician.”  He also made a point to add, “since we ain’t got Prince no mo.”  The 24K Magic Show was my first Bruno Mars concert, and my friend, a musician himself, is right.  Bruno Mars is a talented and true musician.  Imagine a show that combines the guitar stylings of Prince, dance moves to bring back memories of MJ, and the riffs of James Brown.  It really was music (24K) magic.

Unfortunately my friend, who appreciates great music (so I know he would have loved this show) was right about something else… Bruno Mars is young.  Bruno Mars is only 31, which means he may not have had an opportunity to see Prince, MJ, and James on stage live to take copious notes.  Fortunately, their legend lives on in videos which Bruno should study, because you can see their influence all over him.  It would be helpful if he studied how they mastered the ART of putting on a G-R-E-A-T show.  How their shows invoked pure emotions.  (MJ literally made people pass out… there will never be another)

I guess that’s what was missing from Bruno’s show, that connection with the crowd… 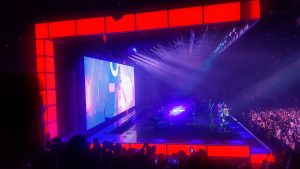 feelings, passion, awe.  But in Bruno, you can see he has potential… the potential to rise to greatness as a musician, song writer, and even, a performer.  I am grateful I made the decision to see his show, because again… it really was a good show, and since Bruno is young, he has time to develop.  In Bruno, you can clearly see the makings of a young performer on the verge of being great.  The audience was a mixture of old and young, diverse ethnicities, with various life experiences, and there was no weed (there’s always the stench of weed at a concert at the Garden), which gives Bruno Mars the following to stand the test of time.  The show may have been short but it was good, and at this point, Bruno Mars has enough GREAT music to eliminate the opening act so he can get straight to the point… Bruno.

Despite the negatives, I intend to see Bruno Mars again in concert.  I am certain that with growth, experience, and more years in the business, he will turn his good show to GREAT.  And what I won’t do is… miss it!!!  C’mon back to NYC Bruno… I will be there!!!